After booking accommodation for the Stirling Range Retreat and at Albany, we set off for a brief drive around Esperance city centre, via breakfast, supermarket and a camera shop (polarizer for one Stephenâ€™s lens).

This exploring first lead us up Wireless Hill to the Rotary lookout viewing platform shaped like the Rotary symbol (a cog?). The view was not too bad but the port area and some of the town was partly obscured by a neighbouring hill.

Looking out over Twilight Beach

This drive also lead us past the towns wind turbines and past Pink Lake which was not particularly pink. (I believe it only appears that way when it has water in it)

We drove along the South Coast Highway for about 100km before detouring south towards the coast and national parks again. (and once again stopping to drop the tyre pressure)

After popping in and out of a few coastal roads and tracks, we finally found the Munglinup Beach Road down to Munglinup beach. Not that much to see there so we moved on. On the way back to the main road, I decided to take a side track which looped back around to the main road and itâ€™s here where we came a little unstuck.

The track became sandy which is not a big problem for the Outback as it has a low range gearbox. Where it does become a problem is when the sand tracks get deep. The car starts to bottom out and eventually just wonâ€™t move.
We got about 200 meters into the track and saw the tracks and felt the car becoming sluggish. I stopped and started reversing back up the track to a section with a harder surface I knew I could turn around in but just didnâ€™t make it. I first thought Iâ€™d just lost traction so I dug the wheels clear but the car still would budge. I then realised the car had bottomed out and well enough that the front left suspension was drooping like it wasnâ€™t taking much weight. A look under the car confirmed it firmly sitting on the sand. 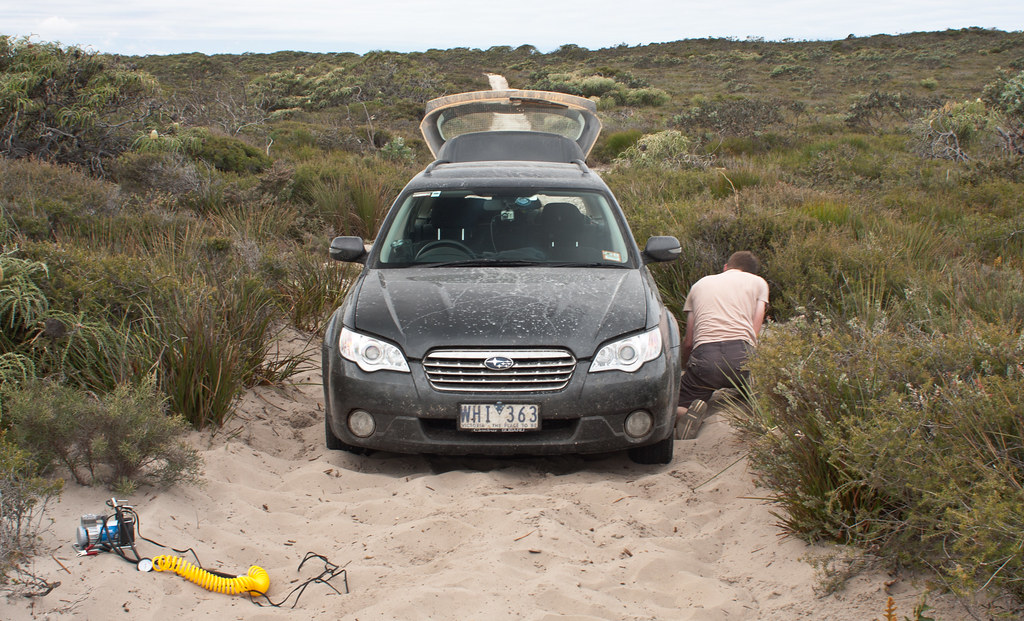 After about 30 minutes of digging, Stephen set off (with his UHF radio in hand) back to the Munglinup Beach camping ground where we knew a few people with 4WDs to be. I continued digging.
I jacked the front of the vehicle up and got some timber under the front left wheel and started digging sand front under the vehicle. Iâ€™m sure I could have cleared it out in a few hours.

Stephen and the friendly camper arrived shortly thereafter and we used a snatch strap to pull the car free. Iâ€™ve previously though of buying a hand winch and I think this now justifies the need. Although there were no trees to winch off, I believe you can use a winch pegged in the the ground or with a dead weight such as a buried spare wheel. Long handled shovel would also be better that the short one I currently have along with a set of sand tracks.

Finally free, I consumed almost a litre of water and we headed on to Hopetoun for lunch. Our plans to head west through Fitzgerald National Park and back to the main road were dashed by the closure of that road for works.

After what seemed like endless straight roads, weâ€™re now at the Stirling Range Holiday Retreat park for the night.