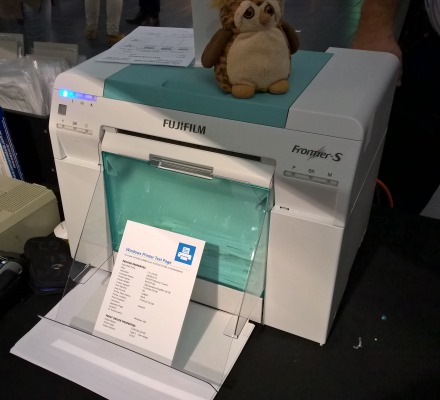 One of my private clients is a photographer and he’s done a pretty good job at trying to keep pace with technology.
He made the jump to digital pretty early and worked through the issues with colour and digital print quality and has installed his own digital photo lab.
As camera megapixels’ increase, storage and file processing speed challenges start to crop up and a small business starts needingÂ serious technology such as storage systems and 10gbit ethernet.

His latest challenge to me was changing the way he shot his major yearly dance event.
In the past photos were taken and then staff would visit dance schools a few weeks later after the photos had been processed and do the selling.
The new approach this year was to shoot, retouch, print and sell on the same day at the venue to capitalise on the impulse buy. Simple. Yep. Kind of.

The FujiFilm DX100 is a stunning little 6 colour inkjet photolab. Inkjet you say, humf. Well this thing prints as good as it’s full sized (small car sized) FujiFilm brother. Now when I say little it’s twice the size of your average inkjet printer.
The cost is about 40c per print compared to 4c off the big brother.
My only gripe about this unit is the lack of onboard ethernet. It’s USB only which means you need to resort to windows printer sharing. The Canon EOS 6D are his current stock camera and the requirement was for two to be able to shoot at the same time (he has a light and a dark background) and save directly to the computer. For this job we setup four camera bodies with WiFi shooting but also saving to card as a safety.
So this is where we found the first limitation. The Canon EOS Utility only allows you to pair a single camera at a time so in order to shoot with to cameras we had to have two different computers running the EOS Utility.
Canon WT.? I could not find any 3rd party software or Canon solution to this limitation. There is software out there but it is geared to remote triggering multiple cameras at the same time, not what we’re after here.
What we really need is a camera server edition which it’s only job is to receive photos from multiple cameras as they are taken.

Lightroom and Photoshop are the final pieces of the solution.
The original plan was to have a single computer renaming, processing and printing all the images. We originally set both EOS Utilities to save their files to the same location (via the network). The main reason for this was Lightroom can only have one auto import folder.
Due to the pace of the event, a single processing workstation couldn’t keep up with pace so we swapped out the simple laptop that was running the second EOS Utility and bought in another workstation.
Another frustration on mine is Lightroom’s lack of support for a shared catalogue. We have the same problem at his studio where he has 4 processing workstations. An image processed on one workstation means nothing to another unless the final product is exported.
I guess the same could be said with Lightroom and Photoshop. As Photoshop knows nothing of Lightroom edits, you need to export to then run Photoshop actions that Lightroom doesn’t have.

The final outcome is each backdrop (light or dark) has it’s own processing workflow.
Camera -> EOS Utility -> Lightroom crop and renumbering then EXPORTED) -> Photoshop actions then print from Photoshop.

In fact for the remainder of this job we are also adding a second printer so each backdrop is now truly independent.

TIP: On two of our computers, Norton firewall software interfered with the Canon EOS Utility network communications. Even after disabling it we had to completely re-pair the cameras and sometimes again when turning the computer on the next day.
Next year we will completely remove security software prior to this job and reinstall afterwards. Canon might need to look at improving the robustness of the software as there should not have been a need to completely re-pair cameras.