Over the past 3 weeks i’ve cleaned up and given away about 35 retired desktop and laptop computers from the Ballet which has certainly created some breathing space in my office.

This time we’ll attack the server room and the rest of the office and actually finish the job.

Before an after shots coming soon…

The Shanghai Grand Theatre is where we are located in Shanghai.
The offices are located downstairs as per the norm but are pretty much concrete rooms. The cabling for phone & power have been an afterthought in most of the rooms.

Pick a cable, any cable….After getting one of the points made live, and the router and printer plugged in, everything seemed to work. Well, a few issues with the router, but I sorted them out eventually.I have a feeling most of the cabling etc has come about due to a few professional shows coming throught the venue. The Lion King only left last week.

Tuesday afternoon I had the oppertunity to play tourist, so I caught the metro along Line 2 to the technology district. I train hoped numerous times to explore the areas around the different stations. Train fairs are about 50c AUD per trip. I think we could learn something.

Amongst the places I wandered by were the Shanghai Science & Technology Museum which is like Scienceworks but 3 or 4 times the size. Seems to be a reoccuring theme here. Gotta be big.

The view towards the main city from Century Park and the view over the Park with heaps of highrise living.
All the gardens here are perfectly maintained. I mean everywhere.

Oh and have I mentioned advertising here? You can not escape. It’s in the lifts, both sides of the street, on any free building space and even floating down the rivers on huge video screens.

I found my way up the Oriental Pearl Tower which is the 3rd tallest tower in the world. Remember that thing about must be big.

The other building here is the Shanghai Grand Hyatt which is where i’m heading to tonight for drinks to Cloud 9, the world’s highest bar.

And finally, I was told I had to experience the Bund Tourist Tunnel which travels underneath the Huangpu River. The easiest way to describe it is a sound and light show that you see as you travel in a small pod like vehicle. I’ll post a video of the experience soon.

Well, I’ve now arrived in Shanghai, China.I have never seen firsthand such a big city with so many highrise buildings. On the bus from the airport, the first ones we saw were about 10 – 20 highrise apartment blocks. The first thing they reminded me of were the pod tower things from the Matrix. (partly because of the way the buildings were lit as well)

Wandering through the rest of the city this evening, trying to find a 7-Eleven or supermarket type place, one of the fellows pointed out that it all feels very Blade Runner like. All these skyscrapers, most of them lit up with neon lighting and advertising. The only thing that’s missing is Harrison Ford.

The other thing I’ve noticed is, although there are trafficlights, they still appear to be optional. Maybe they are there as a guide only.

Photos / Maglev / attempted witty commentary & stuff to follow in the next day or so.
I first have to deal with a theatre in the morning.

I’ve just spent about 2 hours walking around the city.
It’s a strange mix of old and new. There are many vacant blocks and many multistory carparks. It’s kinda weird.

The Civic Theatre in Auckland is a 2000 odd seat venue where our show is based this week.
I have not been in the auditorium yet (but have been on stage) but I’m told its beautiful.It was used in the movie King Kong as the theatre where Kong is chained up.

This is the view from my hotel window.

It’s called the Sky Tower and at 328m, It’s the tallest building in the southern hemisphere.
Looking out over the docks from the viewing platform.

From the old (the ferry terminal building)

And finally, the random photo of the bunch:

I took my nicer looking black jacket with me as I though I should have something half decent to wear out at night.

I think this jacket has been everywhere (man). Or it just gathers items from where it’s been worn.
A lighting gear hire list (from a venue inspection), a plane boarding ticket (present from that friend), my ticket from the Ben Folds & MSO concert and of course a ticket from my friends one night concert in Launceston. Next time I wear it, I’ll probably find something from NZ.

Off home tomorrow, but more from China next week (I hear a MagLev train calling my name).

Well, I’m in Auckland at the moment.It’s a really really tough life when you’re forced overseas for business.

There were just a few of us heading out of town with the Ballet Company..
It’s fantastic, the amount of times I’ve been asked if I’m a lead dancer is great! If only they knew I can’t dance to save myself. But that would be interesting. The ballet dancing, I.T. administrator, lighting designer, singer guy.

Evidently everything is $3 in Japan.

More photos tonight after my wander around the city.

Well, first off, I think this is the year of underlit shows. I’ve just seen another show where the designer, although with good design intent, has missed important ensemble action because of lack of light.Enough said.

Now, something that constantly amazes me is when there is no music during a blackout. With a show as long as HTSIBWRT, it’s important to keep the action moving. It’s the set designers job to create a set that can assist with this. If the set design fails, why do directors and MDs just ignore this and let there be an awkward silence (or not so as we hear crew fumble in the darkness).

I mean really, it’s a no brainer. 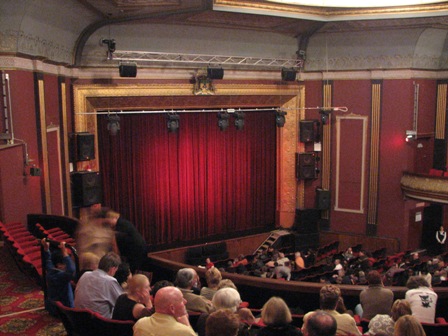 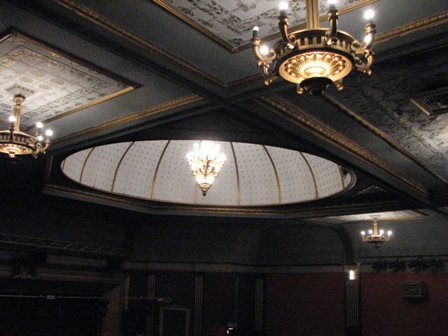 I recently ventured south over Bass Straight to see a friend perform back with her former theatre company in Launceston for their 25th aniversery concert.The Princess Theatre is a lovely old venue with Art Deco stylings. I guess regional companies such as Ballarat & Bendigo use venues similar to this as well, but here in Melbourne town, It would be like using Her Maj or The Princess.
I wish the companies I worked with could use such a venue for their shows.
A bit weird not really having a foyer in a cold place like Launceston though…

How was the show? It was a show… with 3 people (including my friend) that actually performed the number they were doing…
I now also know why I generally avoid the South Pacific type shows.. I don’t fall asleep.
When you’re doing a concert, it’s all about the performance of the performer. There is normally no set or costume (or the rest of the show) to support the numbers otherwise.

Also it pays to have comms between the MD and SM or at least the desk op. Many many times, there was an awkward moment of silence with the lights up and performer on stage waiting for the music to start.

Lighting tips of the day:
When using moving lights for over the audience effects, once is enough.
It gets a bit tired being blinded between each musical number.

Programing moving lights?
Make sure you pre-move & pre-set your gobo & position attributes before cues they are in.
That way they won’t fade (move) to their indended position when the fixture also fades up.

Maybe I’m a little behind, but you can’t see them all.
I just saw Crash tonight, because my friend (a teacher) is looking at it with her film studies class tomorrow.I loved it.
I like that style of movie with multiple stories that intertwine. They are interesting and intelligent.
Magnolia is another that springs to mind…Found the Top 50 Movie Endings of All Time whilst reading the paper that is the internet.
So many movies I have yet to see, so little time in which to do so.

At first you might think I’m talking about finally moving to a place of my own, but alas no. I’ve actually just moved my domain, theatreperson.com, to some proper hosting (courtesy of my friend)This blog is so young, but soon to become redundant.I’ll move everything when I get the new place ready.
Plenty of space to host photos (if I don’t keep using flickr) and a portfolio of my work as such.A web home before a real home. It says it all……

I’m down in Leongatha watching Crazy for you. (It’s interval) All I can say is, I’m loving it!I might occasionally chuckle at some of the production elements of the show, but the cast is really really funny! In a good way. The guys playing the town yolkals are doing it as only country folk could. And you know what? They have some female talent out here, like 20 girls that can tap!
But trust me to have my eye on a girl who’s really interesting to watch, in all regards, only to look in the program and find she’s a secondary student.

Gah! I never touched her I swear!